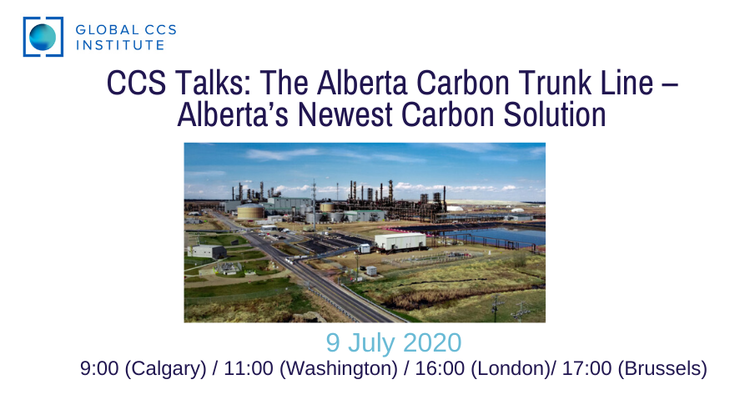 In early June, the Alberta Carbon Trunk Line was declared “fully operational” by its partners.   The ACTL and its associated CO2 emission sources thus became the 20th and 21st large-scale CCS facilities in the world, according to the Global CCS Institute’s CO2RE Facilities Database.  Designed as the backbone infrastructure needed to support a lower carbon economy in Alberta, Canada, the ACTL system is currently capturing about 1.6 million tonnes per year of industrial CO2 emissions from an oil refinery and a fertilizer plant, and delivering it to mature oil and gas reservoirs for use in enhanced oil recovery and permanent storage.

Join the ACTL’s business partners and funders to hear, in their own words, how the project came together, how they overcame the obstacles, and what they envision for the future of the ACTL system, and for CCS around the world.  The 60-minute conversation will be followed by a 15-minute Q&A with the participants of the webinar.

Blair Eddy is an executive with more than 25 years of experience in the WCSB.  After receiving his Engineering degree from the University of Saskatchewan, Blair went on to gain a wide range of technical, operational and commercial experience.  Blair’s operational experience includes the Weyburn CO2 project, where he was involved for over 10 years in all aspects of project development from operations, facilities, and drilling through to production engineering.

Blair joined Enhance when it was founded in 2008 and since that time has been integral to all aspects of the ACTL Project from concept development, through design, commercial analysis and financing.  Over the last 11 years with Enhance Energy, Blair has played a key role in the design of the complete ACTL system, from source capture/compression, transportation to enhanced oil recovery and long term CO2 storage.

Enhance is the owner and operator of the Clive oil reservoir, which is receiving the CO2 from ACTL for EOR utilization and permanent storage.

Jeff Pearson is charged with oversight of Wolf’s Carbon Business Unit, which includes responsibility for the Alberta Carbon Trunk Line system, as well as new business development in the carbon space. He joined Wolf in 2018 and brought a robust engineering background and more than 20 years of diversified experience across the oil and gas sector. After graduating as an Engineer from the University of Alberta, Jeff went on to earn his MBA from the Tuck School of Business Dartmouth. Jeff is a Professional Engineer and holds an ICD.D designation from the Institute of Directors. Before Wolf, Jeff was Vice President Business Development and Strategy at Veresen Midstream LP, Manager of Business Development at TAQA North, Vice President at ARC Financial and a Strategy Consultant at McKinsey & Co.

Wolf is the owner and operator of the compression facilities at the two CO2 capture sites, as well as the 240 km pipeline that transports the CO2 from source to storage.

Kerry Margetts joined NWR in 2016 as Chief Operating Officer and was appointed President in 2017. Since graduating as a Chemical Engineer from Queen’s University in Kingston, Ontario, Kerry has gained over 35 years of experience in the refinery and petrochemical industry. Prior to joining NWR, some of Kerry’s roles included being Shell’s Ontario Distribution Manager, the General Manager of Shell’s Sarnia Refinery and Chemical Plant, and his final role as their General Manager for Contracting and Procurement. Over the years, Kerry has gained hands-on experience in safety, external relations, industrial relations, maintenance, operations and large turnarounds, which makes him a valuable asset to Alberta’s newest stand-alone refinery.

North West Refining, the owner and operator of the Redwater refinery, the major source of pure CO2 for the ACTL.

Jeff joined the Institute in January 2016 as General Manager —The Americas, before moving to the role of General Manager – Client Engagement in 2017. In his current role, Jeff is responsible for ensuring the Institute’s Members derive high value from their membership, as well as expanding the membership base and identifying fee-for-service opportunities.

Prior to joining the Institute, Jeff was Director of Global Projects at the Carbon War Room, an international non-governmental organisation and think tank working on issues regarding market-based solutions to climate change.

Jeff served as Senior Vice President at SustainAbility, a global think tank and strategic advisory firm. He spent 14 years at Mobil Oil and ExxonMobil Corporation, where he was responsible for projects and programs in multiple engineering specialities and across a broad range of environmental, health and safety issues.

Jeff holds a Bachelor of Science in civil engineering from Bucknell University and is a professional engineer.