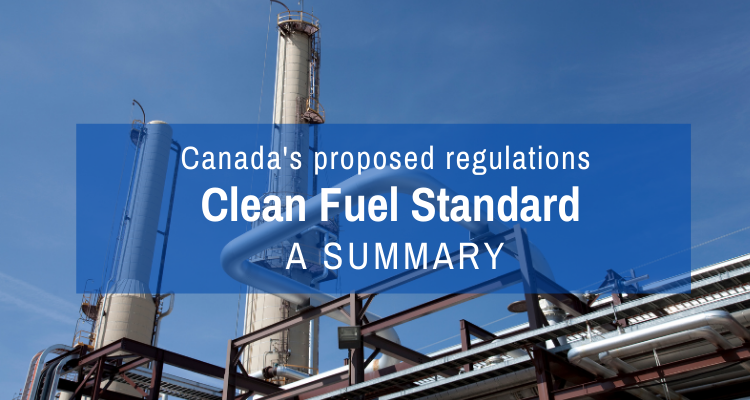 Prior to joining the Knowledge Centre, Stacey worked with the Government of Saskatchewan for over a decade assisting senior leaders in various ministries from Intergovernmental Affairs to Highways. She has worked on several high-profile projects from Premiers’ meetings to Transportation Summits that covered various emerging issues.

Stacey calls Saskatchewan home but has lived all over Western Canada. She is a social creature who has a passion for learning new things, challenging herself and other. Stacey holds a Masters in Business Administration in Executive Management with an International distinction.

The end of 2020 came with a three-pronged approach on climate action from the Canadian government all of which can help to positively impact near-term deployment of carbon capture and storage (CCS/CCUS) in the country. Within a week of releasing its Climate Plan and Hydrogen Strategy (see our statement here), Canada published its proposed regulations for its Clean Fuel Standard (CFS).i

For those catching up, anticipated for the past five years, the CFS is complex and will impact every Canadian and Canadian business that uses liquid fossil fuel. These regulations will require carbon intensity reductions in liquid fuels (i.e., gasoline, diesel, fuel oils, etc.) produced and imported into Canada. 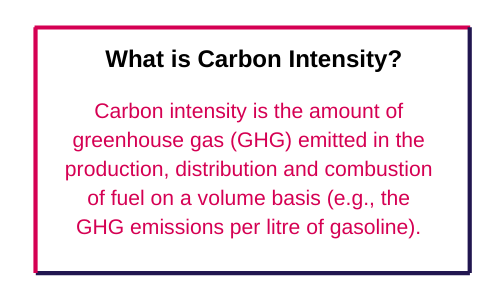 This is unchartered territory for Canada as the CFS is the first policy of its kind to extend beyond transportation fuels to include building industry fuels.i  The expectation is that by encouraging innovation and adoption of clean technologies in the oil and natural gas sectors, and development and use of low-carbon fuels, the CFS would drive major reductions in emissions while boosting GDP and creating tens of thousands of net new jobs.ii

The CFS then resembles a carbon credit market by offering compliance credits which cover liquid fossil fuels by targeting the reduction of the lifecycle carbon intensity of fuels, from production to combustion.

How it all works

Final regulations are expected to be published later this year, with the CFS scheduled to come into effect on December 1, 2022. The proposed Regulations would increase production costs for primary suppliers, which would increase prices for liquid fuel consumers (i.e., households and industry users). In addition, credit revenues would decrease the costs of production for low-carbon energy suppliers, which would make low carbon energy sources (e.g., biofuel, hydrogen and renewables) relatively less expensive in comparison. While it can be difficult to predict the effects of a single policy on GDP 10 years into the future, the CFS could drive billions of dollars of new investment into the new production capacity of conventional and advanced biofuels, and hydrogen.

The proposed regulation would allow primary suppliers, those who produce and import liquid fossil fuels in Canada, to reduce the carbon intensity of those liquid fuels by 10 grams (g) of carbon dioxide equivalent (CO2e) per megajoule (MJ) below their reference carbon intensity by 2030. iii  Actions, such as fuel switching by end-users in the liquid stream can then generate credits.

Credits can be created four ways: 1) undertaking actions to reduce a fuel's lifecycle emissions, 2) blending lower carbon intensity fuels into existing fuel products, 3) switching to fuels with a lower carbon intensity, or 4) paying into a recognized clean fuel  compliance fund (for up to 10% of the compliance obligation). The specifics and proposed rules around credit creation and use are complex and as a result, still in development.iv

Under the program, the federal government says it gives fuel suppliers flexibility to meet the requirements in a cost-effective way that works best for them and creates incentive for industries to innovate and adopt cleaner technologies to lower their compliance costs.v  Primary suppliers with a higher carbon intensity will have to annually retire credits to achieve compliance.  Compliance credits can then be created by undertaking projects that reduce the lifecycle carbon intensity of fossil fuels, such as CCS or renewable electricity. 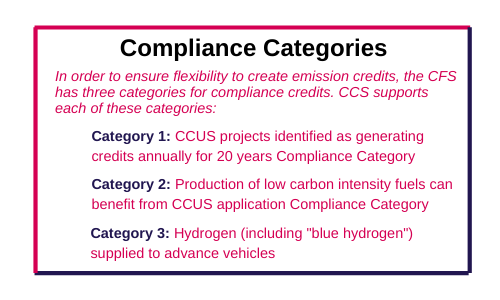 Some clarifications are still required.

While the CFS gives fuel supplier flexibility to meet the requirement in a cost-effective way, the market system and platform are still under development.  To ensure the cross-class trading requirements are respected, only transfers between the same types of account will be allowed.  Quantification methodologies are still under development for projects such as CCS/EOR when it comes to offset protocols in other jurisdictions. The key considerations to credit creation for lifecycle improvements are to demonstrate that a project is “additional” to changes a facility would otherwise undertake due to other regulatory and business reasons, and the details of applicable quantification methods.vi

When will CCS and EOR credits occur?

Credits can be created as of the date of registration of the final Regulations. The number of credits created for projects such as CCS and EOR would be determined by a quantification method, which specifies the eligibility criteria for the project as well as the approach for quantification. This would be maintained outside of the proposed Regulations and developed by a team of technical experts and reviewed by a broader consultative committee.

Two quantification methodologies are under development under the proposed regulations for both CCS and enhanced oil recovery (EOR) projects.vii  Credits could be created for CCS and EOR projects that capture combustion emissions from industrial facilities in addition to oil and gas facilities.

Eligible projects must be conducted in Canada. They must also reduce the carbon intensity of a fossil fuel at any point along its lifecycle, achieve incremental GHG emission reductions, and must have begun to reduce, sequester, or use CO2e emissions on or after July 1, 2017.

How many credits will be generated from CCS / EOR?

The draft regulatory process estimates that these projects would create about 1.3 million credits in 2022, rising to 4.3 million in 2030, and are assumed to remain constant at 2030 levels between 2031 and 2040.viii To mitigate credit liability, a percentage of credits would be held back to cover risks of potential future leaks. The proposed Regulations would apply a 0.5% discount factor for CCS credits that would never be returned to the project proponent.

Project proponents would first apply to Environment and Climate Change Canada to have a project recognized for credit creation and would submit a validation report annually accompanied by a third-party verification report and a verification opinion. For CCS, credits would be created annually for a minimum of 20 years. In addition, projects may be renewed a single time for an additional 5 years after the initial crediting period, provided an applicable quantification method still exists at the time of renewal.

Originally, the CFS was intended to apply to solid, liquid and gaseous fuels. However, the draft regulations modified this original approach. The CFS will focus on liquid fuels first – of which about 80% are used for transportation. It is uncertain if the introduced CFS will apply to coal combusted at facilities that are covered by the federal coal-fired electricity GHG emission regulations.ix

When will the CFS begin?

The December 18, 2020, publication of the proposed Regulations for the Clean Fuel Standard (the "Proposed Regulations") in the Canada Gazette, Part I, will have a formal 75-day consultation period that will end March 4, 2021.  Final regulations are expected to be published later this year, with the CFS scheduled to come into effect on December 1, 2022.

When these effects are taken into account, it is estimated that the proposed Regulations would result in an overall GDP decrease of up to $6.4 billion (or up to 0.2% of total GDP) while reducing up to 20.6 Mt of GHG emissions in 2030, using an upper bound scenario where all credits are sold at the marginal cost per credit.x