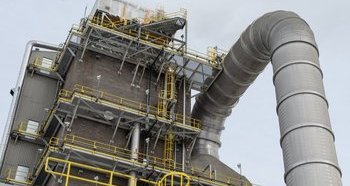 A close-up of a CO2 absorber tower, part of a carbon-capture facility. Photo by International CCS Knowledge Centre

As the Vice-President of Strategy and Stakeholder Relations, Beth represents the International CCS Knowledge (Knowledge Centre) amongst global decision makers and financiers to accelerate engagement on and understanding of the deployment of carbon capture and storage (CCS).  With a focus on linking CCS knowledge globally to reduce locked-in investments and collaboratively support the goals of the Paris Agreement. Her understanding of complex climate change matters, policies and regulations, and international financing concerns act as a solid basis for assisting both national and international implementation strategies for technologies that support environmental targets.​

Prior to joining the Knowledge Centre, Beth worked briefly as legal counsel for the provincial Crown utility. She pairs this industrial perspective with regulatory knowledge as Acting Director of Climate Change with the Government of Saskatchewan. These positions are reflective of Beth’s time with the National Round Table on the Environment and the Economy where she focused on analysing provincial/territorial climate action plans and making recommendations for low cost and sustainable pathways. Beth’s legal education, teaching and practice have explored balancing energy, the environment, and social implications.​

As featured in the National Observer April 29, 2021

It takes courage to be first. We know from the history of innovation that technology improves over time and through replication. This is seen in any industry and any innovation humans have created. If we had stopped at the first mobile phone, we would still be plugged into the wall.

With new technologies, there is always room to optimize and improve development processes. Many of the common hurdles for large-scale carbon capture and storage (CCS) can be addressed when projects share knowledge and do not start from ground zero in their development. Indeed, it is the genius of human invention that leads to next iterations and generations. Such is the case with the world’s first (and globally renowned) Boundary Dam 3 CCS Facility in Saskatchewan (BD3). That facility, having surpassed four million tonnes of carbon dioxide (CO2) captured and prevented from entering the atmosphere, makes a significant contribution to managing greenhouse gases.

By building on the shoulders of this facility, next-generation CCS technology will be significantly cheaper, more efficient and integrate well with renewable energy and other sectors. For instance, Shell has said that if the Quest CCS project were to be built today, it would cost about 30 per cent less thanks to capital efficiency improvements. A second-generation BD3-type project at double the size is projected to have costs 67 per cent lower per tonne of captured CO2 than the first.

A hub of CCS activity like Alberta’s Carbon Trunk Line is a good way to stimulate infrastructure dollars that can be actively utilized by several industries. With this access to the storage part of CCS via the nearby transportation route, others may now be considering capturing carbon at their facilities. In the same way that governments function to provide infrastructure dollars for shared road usage, a CO2 highway, with on- and off-ramps, is a great example of where government dollars could have an exponential impact.

It is important to note that CCS is applicable beyond energy sectors and can be applied to industrial sources of emissions such as iron, steel and cement, which have limited abatement options due to unavoidable CO2 emissions generated through production processes. An in-depth study by the International CCS Knowledge Centre looks at the feasibility of carbon capture on the Lehigh Cement plant in Edmonton.

The benefits of deploying large-scale CCS are substantial for the country. From helping Canada achieve its emissions reductions to spurring economic growth, boosting productivity, and supporting the diversification of Canada’s economy, CCS technology plays a vital part in creating an economically sustainable route to deep emissions cuts.

Incentives are a kick-start

The construction and development of three CCS projects would generate $2.7 billion in GDP across Canada and support more than 6,100 jobs over the construction horizon. A high degree of these economic impacts is viewed as being incremental, given current levels of unemployment in regions where these projects would be developed. The investment in climate action is not cheap. The discussion ought to include the cost of not doing CCS. This is twofold.

We need an all-shots-on-net approach to tackling climate change — and #CarbonCapture needs to be part of the strategy, writes @bethhardy of @ccsknowledge. #CCS #ClimateAction
(Tweet This)

First, from an emissions perspective — this country, along with other nations of the world, cannot meet its emissions reductions commitments without including large-scale CCS in its strategy. CCS takes megatonne bites out of the emissions problem — at least an additional 15 million tonnes (Mt) a year, according to the 2021 federal budget.

Second, the cost for climate mitigation without the inclusion of large-scale CCS would increase 138 per cent just to stay under 2oC. To get to net zero by 2050, that means eight gigatonnes of CO2 have to be captured.

While it is imperative for sectors to transition from a reliance solely on government “handouts” to industry uptake, government support remains crucial. This, coupled with policy certainty, is a necessary next step to aid in the cost hurdles of deployment until they are reduced with scalable iterations. Which is why incentive opportunities for CCS are drawing attention from global governments to examine if tax policy measures have potential. With the United States’ ramp-up to move forward on climate action, this is the right time for Canada to keep pace from a competitive and a jurisdictional perspective, since we share many similarities in geography, industry and economy.

Canada’s renewed target aims to reduce emissions by 40 to 45 per cent below 2005 levels by the year 2030. This is also Canada’s international goal under the Paris Agreement. In order to do so, large-scale, emissions-intensive industrial and power generation processes must be significantly decarbonized. To meet these targets, Canada needs to advance on many clean technologies rapidly and simultaneously. There isn’t a “silver bullet” — we need an all-shots-on-net approach. And given the urgency, that must include further leadership in large-scale CCS in the near term. If we are serious about reducing emissions, then we better be serious about large-scale CCS.

Beth (Hardy) Valiaho is the vice-president of strategy and stakeholder relations with the International CCS Knowledge Centre.
Access the original opinion piece, as published in the National Observer (April 29, 2021), here: https://www.nationalobserver.com/2021/04/29/opinion/canada-must-go-big-carbon-capture-climate-goals