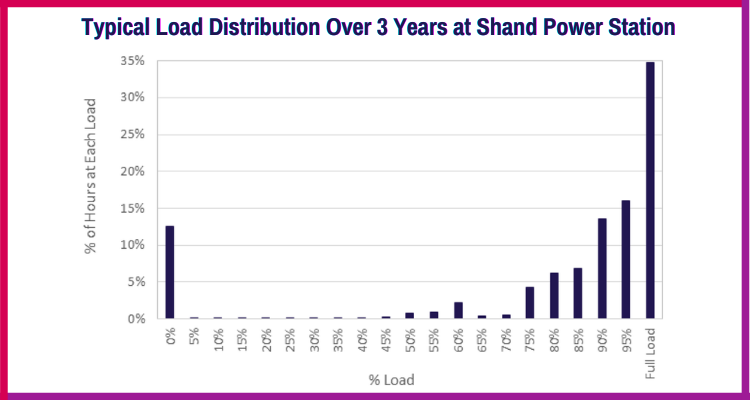 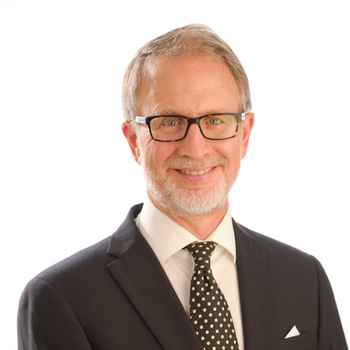 At the International CCS Knowledge Centre (Knowledge Centre), Brent leads the team of engineers who apply application-based knowledge developed from the Boundary Dam 3 CCS Facility (BD3 CCS Facility) and subsequent studies to new carbon capture and storage (CCS) projects. Prior to joining the Knowledge Centre, Brent worked more than 20 years at SaskPower, specializing in the Performance of Thermal Power Generation and the integration of CCS. His experience with SaskPower includes service in Generation Planning studying future supply options including CCS, a Project Leader for Thermal Performance and Heat and Power Integration on the BD3 CCS Facility, a Turbine and Heat Rejection Lead on a pre-commitment study for a new build coal plant with CCS, and as a Performance Engineer for SaskPower’s thermal generating fleet.

A major highlight of Brent’s career is his work on the BD3 CCS Facility project resulting in a carbon capture process fully integrated with the Power Island, including the application of a Flue Gas Cooler. He continues to work on world-leading CCS projects with a goal of reducing the capital cost and applying the learnings from the BD3 CCS Facility. ​

We are often asked why capture efficiencies in carbon capture and storage (CCS/CCUS) systems are traditionally cited at 90 per cent – the boilerplate rate used for the 30-year lifespan of the world-renowned Boundary Dam 3 CCS Facility (BD3) – versus 100 per cent that would appear to be the better target. The 90 per cent target has been assumed for decades with the origins being unclear though likely the result of perceived technical limits and the economics of diminishing returns.

Our team brought together more than 20 years of combined CCS experience and learnings from BD3 that allowed us to spearhead a second generation CCS feasibility study, known as the Shand CCS Feasibility Study (Shand Study), which consisted of process modelling and cost estimation that indicated capture rates exceeding 90 per cent, are in fact possible.  It also explains how a 95 per cent carbon dioxide (CO2) capture rate is achievable, along with reaching up to 97 per cent at reduced electrical loads.

Based on current technology and projects we have found that capturing anything above 97 per cent may still be subject to the law of diminishing returns; however, as the technology matures and more facilities are built, we will see advances in performance and efficiencies making higher capture rates an inevitability.

Capture capacity and efficiency targets are important decisions that need to be considered during the feasibility phase and further evaluated in the Front End Engineering Design (FEED) phase of a CCS project. In the feasibility phase, all major economic scenarios are examined; assessing the practicality of the proposed project. An experienced-based technical team of engineers, like we have here at the International CCS Knowledge Centre, will have the expertise to specifically advise on this, and other phases of a project. We have been asked to provide insight and analysis on a number of projects where poor design decisions have already been locked in while better process assumptions could have been made by acquiring the right oversight early on.

When we talk about having a higher capture capacity, this means that a greater volume of CO2 can be separated and captured. This has important design implications. Similar to determining the square footage of a new home build, one of the first considerations when designing a capture facility is to decide what you want for a desired capture capacity. This dictates the size required for some of the major components in the CO2 capture system, including the absorber and stripper towers and the CO2 compressor.

In order to minimize capital cost, it is often decided to build a CCS plant only as big as needed to capture the amount of CO2 required by current regulations and policies. In the Shand Study, we talk about how a plant should be built to capture a minimum of 90 per cent because this is easily achieved with current technology and any amount less than this increases the cost per tonne of CO2 capture, due to lost economies of scale. As CO2 regulatory policies develop, it is likely that planning for future plants will look to build CCS facilities capturing more than 90 per cent of the CO2 in the flue gas. Plants with plans to capture over 90 per cent reduce the long-term risk in terms of future policy changes towards lower emissions. From a global perspective, building a plant that uses the best available technology should facilitate buy-in for significant investment decisions.

From our ongoing monitoring of the performance of the BD3 capture facility, we realized that the capture efficiency has significantly exceeded 90 per cent when the flue gas flow rate was reduced. This has been attributed to the fact that capture system components designed for the maximum capacity of the facility were effectively oversized at the reduced load.  In other words, the effectiveness of mass transfer of the CO2 from the flue gas to the solvent depends on the amount of contact area and how long the flue gas and solvent are in contact. With lower flue gas flows the relative amount of absorber surface to the gas flow increases and the contact time also increases as it take longer for the flue gas to pass through the absorber.

For the Shand Study, the Knowledge Centre worked with Mitsubishi Heavy Industries and Mitsubishi Hitachi Power Systems to understand the costs associated with designing for higher capture efficiencies as well as the potential for even higher capture efficiencies at reduced loads. You can find these outlined in great detail in chapter seven of the Shand Study.

As the output of power plants must be modulated so that the total power generated matches the power consumed on the electrical grid, our first investigations in the Shand Study looked at the CO2 capture efficiency of a capture facility designed for 90 per cent capture but operated periodically at reduced loads. Figure 1 illustrates the typical operating profile for the Shand Power Station over a three-year period.

While 90 per cent CO2 capture is expected at a full power plant load, we found that more than 97 per cent CO2 capture could be achievable at 75 per cent flue gas flow (see Table 1). This reduction in emission intensity at lower loads means a CCS equipped coal-fired power plant could be made responsive to variable renewable energy generation and effectively multiply its impact on emissions reduction. Designing a capture facility that could maintain high capture efficiency while responding to variations in electricity demand was a central focus of the study. 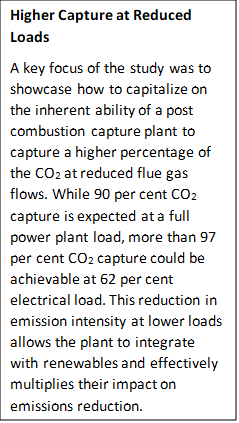 As well, when combined with the effective emissions reduction from selling fly ash for use in concrete applications, the result is an annual average emission intensity of zero – meaning carbon-neutrality for a post-combustion coal plant with CCS is within reach.

The study looked at a preliminary cost and performance estimate for a capture system that was designed for 95 per cent capture at full load. The effects of capture efficiency were calculated by evaluating the capital cost increase from a 90 to a 95 per cent design capture efficiency, as well as the increased volume of CO2 captured.

These values were used to determine the changes in capital costs and energy penalty per tonne of CO2 captured, which are outlined in greater detail in chapter ten of the study. What we found in our preliminary analysis was that the overall increase in capital costs required to facilitate the increase in capture efficiency was less than the increase in the amount of CO2 captured. This produced a lower overall cost of capture per tonne. This was true even when the increased steam requirements for solvent regeneration – that came with the higher capture efficiency – were considered.

Our team combined the full load performance of this 95 per cent capture system with the higher capture rates at reduced flue gas flows to predict an annual CO2 emissions intensity of 71.4 kg/MWh (see Table 2), which is a 33 per cent further reduction relative to the 90 per cent design case.

These increases in capital costs resulting from increased capture capacity would be something that would be further analyzed in a Front-End Engineering Design (FEED) study, where technical requirements, investment decisions, and associated risk considerations for a project are presented.

From our study, we concluded that there appears to be significant value in selecting capture rates above 90 per cent; however, the determination of the appropriate design capture rate would need to be explored fully in the FEED study. With growing net-zero commitments seen across industries, evidence of potential carbon-neutrality on CCS Facilities is invaluable knowledge. This is especially true for heavy-emitting industries, including cement and steel manufacturing, where the CCS technology specified in the study is applicable. Just have a look at “HeidelbergCement Sustainability Commitments 2030” which makes a commitment to achieving Zero Emissions by 2050 and currently has CCS on cement projects underway at their Norcem Brevik and Lehigh Cement plants.iv

Another study, “Beyond 90% capture: Possible, but at what cost?” published recently in the International Journal of Greenhouse Gas Control, concluded that higher capture rates are a necessity for both reaching net-zero targets and facilitating a net-zero transition, suggesting that they are “economically feasible at low marginal costs” and that capture rates “should be as high as economically viable and as close to 100% as technically possible.” It also states that there is “an urgent need to better understand the costs that are associated with beyond 90% capture in different contexts and challenge the potential narrative that higher rates of capture are excessively difficult, which could, in turn, act to limit the role of CCS in a sustainable future.” v

All negative emissions technologies are crucial and necessary to achieve a two or less degree scenario. The greater the deployment of CCS, the more efficient and advanced this critical technology will become as lessons learned are passed on, driving down project costs and risks.

Capturing anything above 90 per cent is not only achievable, but also proof that CCS is quickly advancing and is a highly successful clean energy transitionary technology.  The question that really needs to be asked is why such an effective technology isn’t being more readily adopted and deployed at the rate we know that is needed to limit global warming.