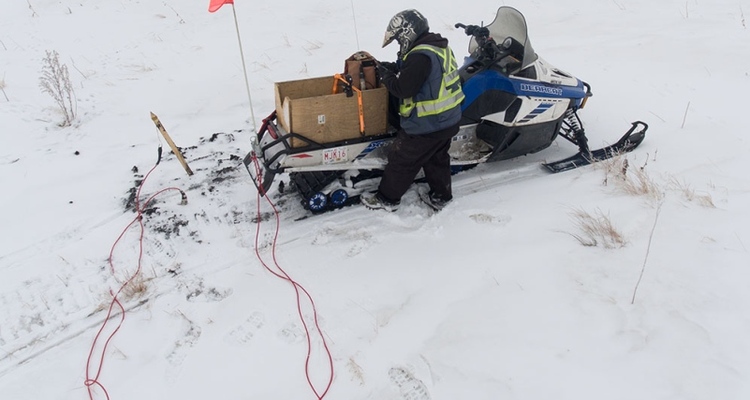 as published in Pipeline News February 3, 2020

Estevan – The last week of January had quiet thumps heard in the vicinity of the Aquistore wells, located approximately three kilometres west of Boundary Dam Power Station. Roughly 400 of those thumps were “shots” of dynamite, going off as part of an ongoing 4D seismic survey of the carbon dioxide injection into the Aquistore project.

Aquistore injects carbon dioxide captured at the Boundary Dam Unit 3 Integrated Carbon Capture and Storage Project. CO2 that is not used in the Whitecap Resources Inc.-operated Weyburn Unit for enhanced oil recovery (EOR) is instead injected 3.4 kilometres below the surface into deep saline aquifers. The “4D” aspect is three dimensions, and time.

Erik Nickel is director of operations with the Petroleum Technology Research Centre, which has spearheaded this project from the beginning. (SaskPower took over operation of the well when operations commenced.) He said on Jan. 28, “Today we’re doing what we call a monitor survey. Since we first started with Aquistore, we’ve done many seismic shoots. I believe this is the sixth or seventh now.”

The initial ones were done before the two Aquistore wells – an injection and an observation well – were drilled. They were meant to provide a baseline, prior to the injection of any CO2. Nickel said, “Then we look at certain tonnages of CO2 injected to take another survey to monitor the plume, to ensure it’s growing at a rate that makes sense and that there’s not any out-of-zone migration.

“We won’t know the results of this survey for a couple of months. It’s like getting your film developed. It takes a lot of processing on the data that we’re gathering today before we can get a picture. The last picture, at about 141,000 tonnes, showed it be on the order of about 300 to 400 metres across, about the size of the lease here.

“It hasn’t gone far. They can measure the thickness as well. It has gotten thicker, not only in extent, but it’s filling up the porous zones. It’ll be interesting when we see almost a doubling of what we had before. The plume probably won’t double in size, but I’m guessing it will be 400 to 500 metres across,” Nickel said.

It’s not a perfect circle. He explained, “It’s definitely not that. It’s elongated, in a northwest to southeast direction. We’re not sure, exactly yet, why that is. It might represent a preferential direction of permeability in the reservoir. There might be some structure down there at 3.4 kilometres that is affecting the direction the CO2 moves.

“The important thing is that we’re not seeing it rise up hole anyway at all, or shoot off in one direction,” he said.

The target is the Deadwood formation, which is about 200 metres thick, but it’s not one big tank of sand. “There’s many thin zones. At Aquistore, we have five zones perfed, each one on the order of 15 to 30 metres thick. The middle two or three are taking the majority of the CO2, and that’s where we say the plumes are growing,” Nickel said.

As a result, there’s actually multiple plumes, one for each zone, and they’re all different sizes.

The PTRC pioneered 4D seismic while monitoring the Weyburn-Midale CO2-EOR project in the early part of this century. But that was at a depth of 1.4 to 1.5 kilometres. This is more than twice as deep.

There is a permanent geophone array installed around the Aquistore site. “We also have a network of fibreoptic cables. There’s one going down the observation well that we’re using to record, right down to the reservoir level.”

One is laid in a north-south trench on the surface within the site. Another experimental one is in a helical pattern underground. It was a recent addition with new research to find the optimal signal-to-noise ratio.

The CO2 injection has been pretty steady at 400 to 500 tonnes per day, but part of the plan later in the week was to ramp up the injection rate in an incremental manner from the usual to the maximum injection rate. That could possibly be up to the full production capacity of the plant, which 2,800 to 3,000 tonnes per day to see that, if necessary, this injection well can handle that amount.

Nickel added there has been zero induced seismic activity as a result of Aquistore. This has been a concern in some regions for injection wells and fracking.

The PTRC and Deep Earth Energy Production Corp. (DEEP) have similar interest in the Deadwood formation. DEEP’s interest is to use that formation as a source of geothermal heat.

The two Aquistore wells were, in succession, the two deepest wells in Saskatchewan until two recent wells by DEEP surpassed them. The two organizations have exchanged information to benefit each other. “They’ve taken a real nice core there, and we want to definitely have a look at it and maybe get some samples of that. We’ve provided them with data from this site, in advance of their drilling, as well.”