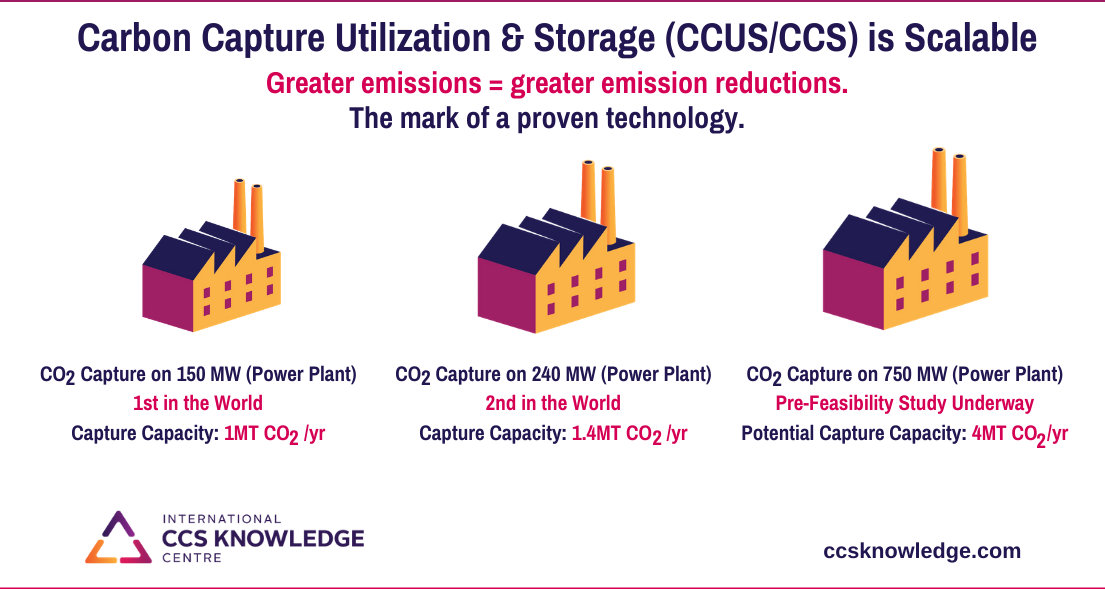 Regina, SK – Amplifying the impact of emission reductions through carbon capture and storage (CCS) is the focus of a new pre-feasibility study exploring the potential application of carbon dioxide (CO2) capture on 705-megawatt coal-fired power plants. This project is part of a broad study examining the viability of a regional commercial-scale geologic CO2 storage hub in the Southeastern U.S. The International CCS Knowledge Centre (Knowledge Centre), based in Regina, SK Canada, is collaborating with an international team on the U.S. Department of Energy (DOE)-funded project to develop the conceptual designs and capital cost estimates evaluating the installation of post combustion carbon dioxide (CO2) capture on a Southern Company electrical generating station.

The project would represent a significant scale-up and is a natural progression in the maturation of carbon capture technology. By bringing leadership, vision and experience based on its substantive learnings from both the fully integrated Boundary Dam 3 CCS Facility and its comprehensive second-generation CCS study (Shand CCS Feasibility Study), the Knowledge Centre is performing the carbon capture pre-feasibility study of the scenario.  This study is being conducted through a cooperative agreement with the project manager, Southern States Energy Board, and a team that includes Southern Company, Mitsubishi Heavy Industries (MHI) Group, and Stantec Consulting Ltd.

The pre-feasibility study will look at carbon capture design and cost. It will include details such as an analysis on steam integration options between the generating unit and the capture plant, as well as the identification of potential impacts of the new processes on existing plant environmental permitting. The theoretical installation of carbon capture systems at power plants would not only ensure reliable baseload electricity, it would preserve the value of the existing facility, while also actively making significant strides in reducing anthropogenic greenhouse gas emissions.

“With the megatonne potential in CO2 reduction, we are excited to work with a great team on this important and next step project for large-scale carbon capture and storage. We applaud both the US Department of Energy and the Southern States Energy Board for their commitment to taking significant strides toward climate action.”
- Conway Nelson, VP, Project Development & Advisory Services, International CCS Knowledge Centre

“Stantec is proud to play a role in the first-of-its kind carbon capture and storage work in Saskatchewan as the Engineer of Record on this project. Stantec’s team of experts will provide engineering expertise alongside our partners to execute the pre-feasibility study stage of this project.”
- Mark Griffiths, Senior Principal, Energy & Resources, Stantec, Saskatchewan

About the International CCS Knowledge Centre (Knowledge Centre): With a mandate to advance the global understanding and deployment of large-scale CCS to reduce global GHG emissions, the Knowledge Centre provides the know-how to implement large-scale CCS projects as well as CCS optimization through the base learnings from both the fully-integrated Boundary Dam 3 CCS Facility and the comprehensive second-generation CCS study, known as the Shand CCS Feasibility Study. Operating since 2016 under the direction of an independent board, the Knowledge Centre was established by BHP and SaskPower. For more info: ccsknowledge.com