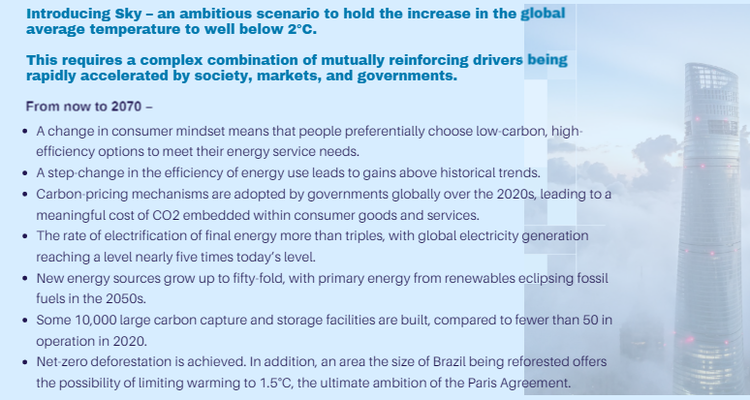 The world would be equipped with 10,000 carbon capture and storage (CCS) installations - Shell's Sky Scenario.

Royal Dutch Shell on Monday outlined a scenario in which, by 2070, we would be using far less of the company’s own product — oil — as cars become electric, a massive carbon storage industry develops, and transportation begins a shift toward a reliance on hydrogen as an energy carrier.

The company’s Sky scenario was designed to imagine a world that complies with the goals of the Paris climate agreement, managing to hold the planet’s warming to “well below” a rise of 2 degrees Celsius, or 3.6 degrees Fahrenheit, above preindustrial levels. Shell has said that it supports the Paris agreement.

The scenario, which finds the world in a net-zero emissions state by 2070, is based on the idea that “a simple extension of current efforts, whether efficiency mandates, modest carbon taxes, or renewable energy supports, is insufficient for the scale of change required,” the oil company document reads.

“The relevant transformations in the energy and natural systems require concurrent climate policy action and the deployment of disruptive new technologies at mass scale within government policy environments that strongly incentivize investment and innovation.”

The company also cautioned that Sky is only a scenario — a possible future dependent on many assumptions — not a reality that will definitely be realized.

Shell is one of the globe’s largest publicly traded oil companies and produced 3.7 million barrels of oil equivalent per day last year.

But the company’s own recent investments reflect a slight change in focus or, at least, a hedging of its bets. In October, it purchased NewMotion, an electric-vehicle charging company. Shell now operates a small number of stations providing hydrogen fuel to vehicles in the United States and Europe, and is involved in pursuing carbon capture and storage technologies through its Quest project in the Canadian oil sands and the enormous Gorgon project in Australia.

The company has also acquired BG Group, a major natural gas company, as part of placing greater emphasis on producing natural gas, which releases fewer greenhouse gases during combustion than oil or coal.

The company is being pressured by some shareholders to do more on climate change, though some investors support the current state of the company.

“Anytime we see a forecast looking out many decades (in this case, 2070), it can be an interesting talking point but does not seriously influence investor decisions,” said Pavel Molchanov, energy analyst at the investment firm Raymond James, said in an email. “Even for long-term-oriented investors, that is simply too distant a time frame.”

Royal Dutch Shell chief executive Ben van Beurden in past interviews with The Washington Post has acknowledged that “climate change is real” and that “action is needed” but has asserted that the world will need to keep burning fossil fuels even if renewable energy catapults forward.

“It doesn’t mean we have to kiss hydrocarbons goodbye. In fact, we can’t,” he said.

In November, the company said it would cut the carbon footprint of making (not burning) its own petroleum products by 20 percent by 2035 and by about half by 2050. Shareholder groups, however, have noted that if Shell increases its overall fossil fuel production, then it will undercut some of those gains.

In the Sky scenario, the world’s consumption of oil would rise through 2025 before starting to decline. Global oil consumption would begin to drop in the 2030 and fall below current levels in 2040.

“Liquid hydrocarbon fuel consumption almost halves between 2020 and 2050 and falls by 90 percent by 2070 in the sector,” the document says.

“It is striking that a company built on energy flow commodities sees them declining permanently after 2040,” said Peter Fox-Penner, director of the Institute for Sustainable Energy at Boston University, in an emailed comment on the scenario.

Other changes are just as massive. Nuclear power would triple, the total use of electricity would expand fivefold, and the world would be equipped with 10,000 carbon capture and storage (CCS) installations.

“The reliance on CCS stands out in Sky, and what surprised me was the rapid decline in natural gas after 2040,” said Morgan Bazilian, a professor at the Colorado School of Mines who studies energy and fossil fuels. “Those are interesting contours, given Shell’s move toward natural gas in the recent past.”

Bazilian praised Shell’s future energy scenarios in general, noting, “In my mind,  Shell has always been a leader in this space, and that is again the case with Sky.”

Molchanov said in an email: “Most of the trends that Shell is describing — with the notable exception of carbon capture — are already commercially viable. Some are in widespread use, while others (e.g., hydrogen in transportation) are in early stages of adoption. But still, extrapolating from current trends a half-century into the future is a textbook example of ‘more art than science.’”

Boston University’s Fox-Penner agreed Shell’s scenario contains all the core elements of what’s necessary to decarbonize world energy by later in this century, and that many of the required pieces already exist in some form. But some changes, he said, are a lot harder to accomplish than others, such as cutting emissions in the agricultural sector and from key industrial processes.

“The greatest constraint is certainly not technology, it is political and economic disruption to governments and economies who depend on the current system and who must find the funds to retire a huge capital stock early and rebuild it in place,” he said in an email.