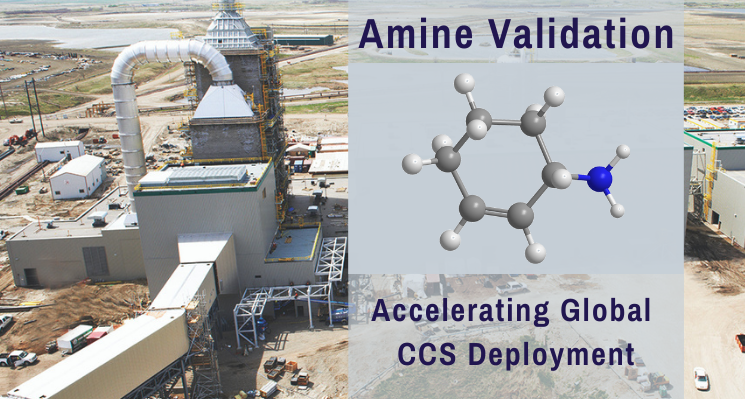 Amine, as an essential ingredient in carbon capture and storage (CCS) technology in post-combustion carbon capture (PCC), has a double edge. While it allows for the most substantive cuts in carbon dioxide (CO2) emissions needed to meet climate mitigation targets, amine is also a central player in tackling a cost barrier for broad CCS deployment. Ironically, deployment is the driving force behind the advancements in CCS technology. It is by learning that technology reduces costs, risks, and sees gains in optimization and efficiencies. Key to these gains is understanding amine behaviour, particularly its longevity in application to various sources.

Improving efficiency is a key factor in ongoing process optimization of the energy-intensive process of CCS.  As such, studying the unique characteristics and behaviour of various amine solvents in combination with different flue gas streams has become a major focus of the International CCS Knowledge Centre (Knowledge Centre).

Having spearheaded the Shand CCS Feasibility Study, the Knowledge Centre notes a capture capital cost reduction of 67 per cent per tonne of CO2 for second generation CCS.

Amine solvents used in the chemical CO2 absorption process of CCS have been particularly unpredictable, and in turn, an area of concern for decision-makers contemplating a new, or looking to improve an existing, CCS project. In seeking to continue to eliminate barriers to widespread deployment of CCS and further advance this crucial technology, the Knowledge Centre established its Amine Validation Program in 2019.

While all methods of CCS share a particularly high capital investment and a unique set of advantages and disadvantages, Amine PCC technology allows for a very high degree of purity in the CO2 captured. The process involves using specific liquid solvents – typically amines – to separate CO2 from other components of a flue gas; capturing CO2 through a chemical reaction after a flue gas stream is generated from the fuel combustion process.

PCC is currently the most widely-employed technology used for large-scale carbon capture. PCC methodology is well-established commercially and has a distinct advantage in that it can be retrofitted to existing plants without requiring any fundamental changes.

Amine health and maintainability are a critical factor in the economics of operating PCC amine technology. The focus of the Amine Validation Program is to provide a platform and methodology to allow the study and comparison of the behaviour of multiple amines on a variety of different flue gas streams. Identifying key parameters is thus needed to establish common testing techniques. Creating a standardized and practical testing approach is beneficial for amine vendors looking to create more marketable solutions as well as for project developers looking to quantify project risks. Reducing a major risk factor in the capture process then opens the door for greater deployment, which further drives down costs, as economies of scale come in to play.

Amine PCC uses an amine-absorption process to capture and separate CO2 from a flue gas stream. Amines are derivatives of ammonia and are water-soluble organic chemicals that contain reactive nitrogen atoms and can rapidly, selectively, and reversibly react with CO2.

Amines have been used in carbon capture extensively and studied for more than 20 years.  Compared to other options, the types of amines used in PCC are generally considered relatively non-volatile, inexpensive, and of moderate technical risk. They have also been utilized on a commercial scale for many years to capture CO2 from a variety of sources and for decades in other applications. Currently, amine-based CO2 capture is the most industrially-developed and widely-used method applied to the PCC method.

On post-combustion flue gas streams, the CO2 capture and separation process involves a reversible chemical reaction between the CO2 and the amine solvent. The amine is circulated in the system and cooled prior to being mixed with the flue gas to capture the CO2. The amine is then moved to a separate vessel where the application of heat reverses the process, releasing the pure CO2 previously captured from the amine. The amine is then cooled in order to repeat the process (see Figure below). The ability of the amine solvent to capture CO2 is key to the capture process. This ultimately yields high-purity CO2 gas that is suitable to be compressed into a supercritical state and transported by pipeline to be permanently stored or used for enhanced oil recovery (EOR).

Global indications suggest that every amine solvent behaves differently from one combustion source to another due to the differences in amine chemistry, makeup of the flue gas stream, and other contaminants present in the process.

According to Corwyn Bruce, VP of Technical Services at the Knowledge Centre, the research currently available on post-combustion amine-based carbon capture is insufficient for adequately understanding interactions between amines and flue gases.

“Long-term testing of amines was quite often limited in duration around the time that BD3 was built. The data we have on the behaviour of the amine used on this particular facility does not reflect the accelerated degradation that occurred closer to 3,000 or 4,000 hours of run time.”

In the presence of the common components and undesirable particulates present in a flue gas stream, amines degrade and must be replaced with fresh amine solution for the capture process to continue optimally. Degradation products and operational challenges are unique to each of the different amines in combination with various flue gas streams. As such, piloting must adequately emulate the conditions of the final, full-scale process.

To address this research gap, the Knowledge Centre is considering the development of a skid – a portable testing apparatus. One of the main objectives of the skid would be to conduct longer-term monitoring of amine behaviour that will emulate an equivalent environment on a smaller scale. Knowledge Centre Chemist, Colin Campbell, explains how the project has a completely different focus and approach to how carbon capture systems have traditionally been studied.

“A lot of the test skids have been used for years to study the energy efficiency of a particular solvent system, but what we’re interested in is how the amine reacts, how it degrades, and how it will behave, in contact with the gas stream.”

Long-term testing of an amine solution for carbon capture typically occurs after the product is selected at a pilot-scale facility, which is a rather large and costly process. The ability to test multiple amines prior to selection – targeting expected amine health on specific applications and flue gas streams – is the central purpose of the Amine Validation Program.

A key design feature will allow the skid to be connected to a variety of carbon dioxide-containing gas streams beyond coal-fired plants as CCS technology is easily applicable to other heavy-emitting industries.

“If we can predict amine behaviour on a given application because of learnings from running these test skids or from building a database of contaminants vs. amine types – ultimately, that information can go into either selecting the type of amine for a particular project or the size of the amine reclamation equipment,” says Campbell.

This has major implications for advancing CCS across industry sectors, allowing the same type of amine quality tests to run on flue gas streams from cement, steel, and other heavy-emitting sources that could greatly benefit from large-scale CO2 reductions.

“Cement flue gas is similar to coal-fired flue gas,” says Bruce. The experience gained on the first coal systems will be instructive for achieving better outcomes sooner, in other industrial sectors.”

The Knowledge Centre has already begun applying lessons learned from the BD3 CCS Facility to the Lehigh Hanson cement plant in Edmonton, Alberta in a joint CCS feasibility study that targets a 95% CO2 capture rate.  The Amine Validation Program has the ability to provide further knowledge of process improvements for second-generation large-scale CCS technology in an effort to increase commerciality of this technology needed for significant emissions reductions worldwide.

Creating an automated system to aid in better understanding, and more closely predicting, amine behavior was also identified as a crucial feature of the program. The skid will be equipped with an instrumentation package that allows for online monitoring and analyses. The ability to remotely monitor the skid as it operates in the field will eliminate labour costs and other limitations associated with on-site monitoring. The online capabilities also allow parameters to be measured continuously in real-time versus the daily or hourly samples typically acquired and analyzed in a physical laboratory setting.

Aside from ensuring the project itself is cost-effective to operate, the analytical portion of the test equipment will be designed to reduce or eliminate Intellectual Property (IP) barriers.

“Most of the information from pilot testing that’s been done has not been shared because it’s proprietary, which has been a real set back of long-term adoption of carbon capture. We’re hoping to design the skid in an IP-neutral fashion so we don’t need to know the chemical formulas of proprietary amines,” says Campbell.

When proprietary amines are submitted for testing, legal ramifications and restrictions on who is permitted to conduct the laboratory tests and analyses are involved. This has caused delays and other challenges that are not conducive to accelerating deployment of CCS technology.

The skid runs will be conducted using monoethanolamine (MEA) – a benchmark amine that is the widely used in the chemical absorption process for carbon capture. Upon successful completion and operation of several skids, Campbell hopes the technology will encourage more proprietary amine vendors to take a more extensive look at the degradation behaviour of their amines.

“Surprises cost money. Hopefully we can make significant contributions to reduce capital and guarantee much-lower operating costs by selecting a different amine for an application, but there has been little study of multiple amines over a long-period. We don’t know how each will behave and degrade on a similar application. These are the answers we’re looking for,” added Campbell.