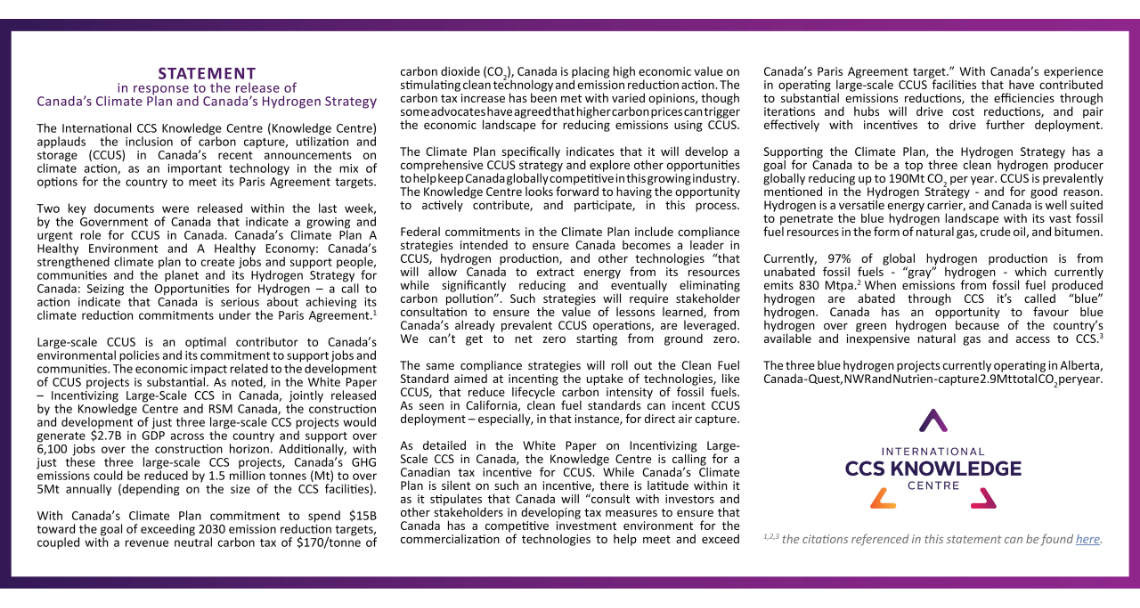 The International CCS Knowledge Centre (Knowledge Centre) applauds the inclusion of carbon capture, utilization and storage (CCUS) in Canada’s recent announcements on climate action, as an important technology in the mix of options for the country to meet its Paris Agreement targets.

Two key documents were released within the last week, by the Government of Canada that indicate a growing and urgent role for CCUS in Canada. Canada’s Climate Plan A Healthy Environment and A Healthy Economy: Canada’s strengthened climate plan to create jobs and support people, communities and the planet and its Hydrogen Strategy for Canada: Seizing the Opportunities for Hydrogen – a call to action indicate that Canada is serious about achieving its climate reduction commitments under the Paris Agreement.

Large-scale CCUS is an optimal contributor to Canada’s environmental policies and its commitment to support jobs and communities. The economic impact related to the development of CCUS projects is substantial. As noted, in the White Paper – Incentivizing Large-Scale CCS in Canada, jointly released by the Knowledge Centre and RSM Canada, the construction and development of just three large-scale CCS projects would generate $2.7B in GDP across the country and support over 6,100 jobs over the construction horizon. Additionally, with just these three large-scale CCS projects, Canada’s GHG emissions could be reduced by 1.5 million tonnes (Mt) to over 5Mt annually (depending on the size of the CCS facilities).

With Canada’s Climate Plan commitment to spend $15B toward the goal of exceeding 2030 emission reduction targets, coupled with a revenue neutral carbon tax of $170/tonne of carbon dioxide (CO2), Canada is placing high economic value on stimulating clean technology and emission reduction action. The carbon tax increase has been met with varied opinions, though some advocates have agreed that higher carbon prices can trigger the economic landscape for reducing emissions using CCUS.

The Climate Plan specifically indicates that it will develop a comprehensive CCUS strategy and explore other opportunities to help keep Canada globally competitive in this growing industry. The Knowledge Centre looks forward to having the opportunity to actively contribute, and participate, in this process.

Federal commitments in the Climate Plan include compliance strategies intended to ensure Canada becomes a leader in CCUS, hydrogen production, and other technologies “that will allow Canada to extract energy from its resources while significantly reducing and eventually eliminating carbon pollution”. Such strategies will require stakeholder consultation to ensure the value of lessons learned, from Canada’s already prevalent CCUS operations, are leveraged.  We can’t get to net zero starting from ground zero.

The same compliance strategies will roll out the Clean Fuel Standard aimed at incenting the uptake of technologies, like CCUS, that reduce lifecycle carbon intensity of fossil fuels. As seen in California, clean fuel standards can incent CCUS deployment – especially, in that instance, for direct air capture.

As detailed in the White Paper on Incentivizing Large-Scale CCS in Canada, the Knowledge Centre is calling for a Canadian tax incentive for CCUS. While Canada’s Climate Plan is silent on such an incentive, there is latitude within it as it stipulates that Canada will “consult with investors and other stakeholders in developing tax measures to ensure that Canada has a competitive investment environment for the commercialization of technologies to help meet and exceed Canada’s Paris Agreement target.” With Canada’s experience in operating large-scale CCUS facilities that have contributed to substantial emissions reductions, the efficiencies through iterations and hubs will drive cost reductions, and pair effectively with incentives, to drive further deployment.

Here are the recent emissions reductions numbers from the large-scale carbon capture and storage facilities operating in Canada: the Quest CCS facility surpassed 5 Mt of CO2 captured and stored; the Boundary Dam CCS Facility surpassed 3.7Mt captured contributing to the over 35Mt permanently and safely stored in the Weyburn-Midale oilfield, preventing significant volumes of CO2 from entering the atmosphere and ensuring it is safely and permanently stored.

Supporting the Climate Plan, the Hydrogen Strategy is a versatile energy carrier, and Canada is well suited to penetrate the blue hydrogen landscape with its vast fossil fuel resources in the form of natural gas, crude oil, and bitumen.

Currently, 97% of global hydrogen production is from unabated fossil fuels - “gray” hydrogen - which currently emits 830 Mtpa1. When emissions from fossil fuel produced hydrogen are abated through CCS it's called “blue” hydrogen. Canada has an opportunity to favour blue hydrogen over green hydrogen because of the country’s available and inexpensive natural gas and access to CCS.

As noted in the aforementioned, White Paper, Canada has been a world leader in CCS, and is home to three blue hydrogen projects currently operating in Alberta, Canada - Quest, NWR and Nutrien - capture 2.9Mt total CO2 per year.