Why is it Important to Capture CO2?

Carbon dioxide (CO2) is a natural part of the atmosphere. Plants take up and use CO2 to produce energy, and animals breathe out CO2 as a natural part of their existence. In a perfect world, this represents a balance of eco systems.   But the world is experiencing an increased amount of CO2 in the atmosphere beyond natural sources.  Increased levels of CO2 is causing the earth’s temperature to rise, which is being attributed to an increased level of anthropogenic or man-made greenhouse gas emissions. 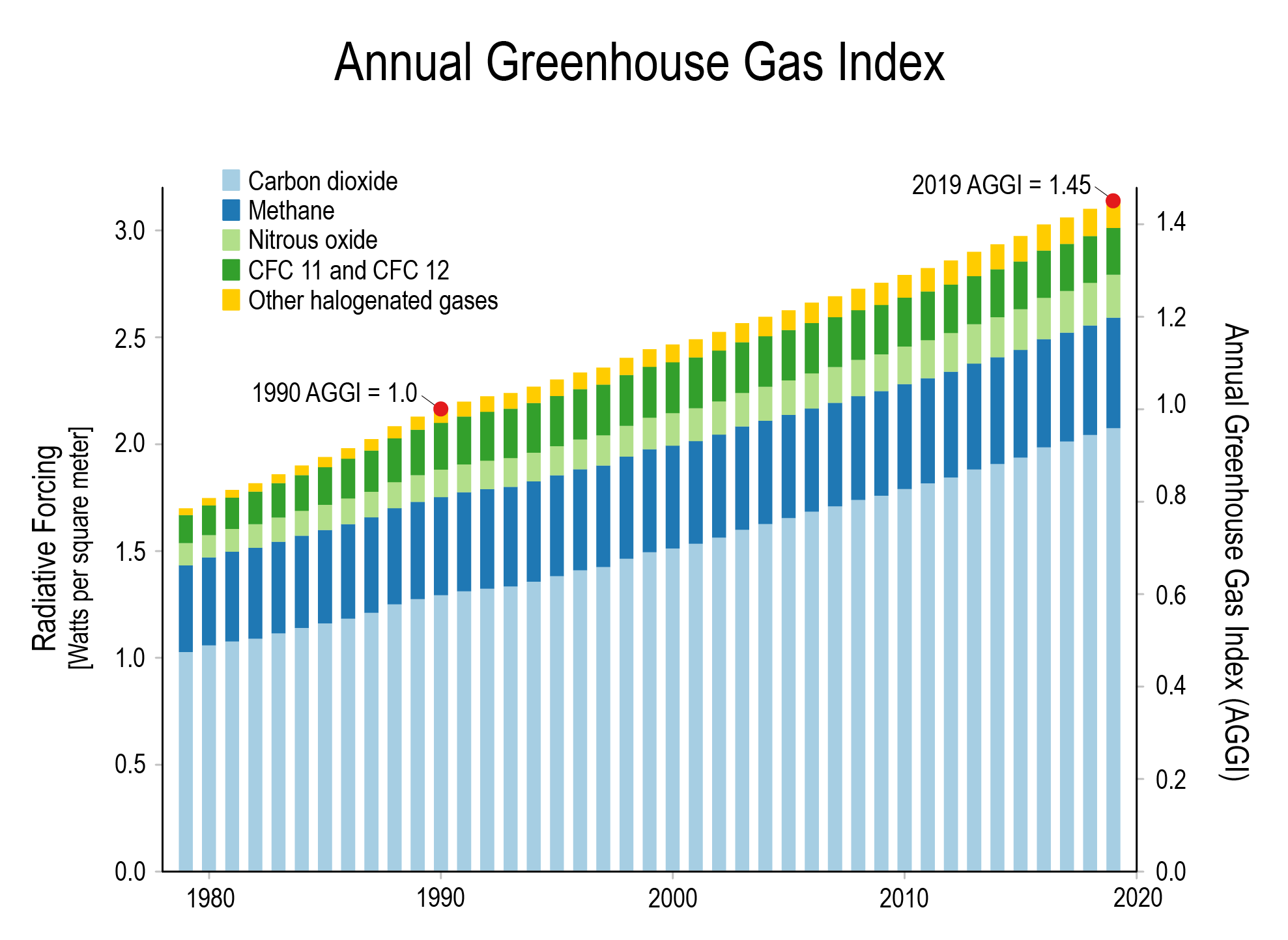 The Annual Greenhouse Gas Index (AGGI) is a measure of the capacity of Earth’s atmosphere to trap heat as a result of the presence of long-lived greenhouse gases (GHGs). The AGGI provides standardized information about how human activity has affected the climate system through greenhouse gas emissions.

This indicator demonstrates that the warming influence of greenhouse gases in the atmosphere has increased substantially over the last several decades. In 2019, the AGGI was 1.45, which represents an increase of more than 40 per cent since 1990 (US Global Change Research Program).

GHGs are generated by a variety of industrial processes and applications.  Systems that include the burning of fossil fuels in power plants to make electricity, and industrial processes such as refining oil or producing iron, steel, cement and ammonia all emit large amounts of CO2. Emissions also come from cars, trucks, ships and aeroplanes, and from domestic sources, such as heating our homes.

Excessive CO2 is the greatest contributor to the warming of the planet. In order to prevent large amounts of GHGs from entering the atmosphere, the world has developed carbon capture and storage (CCS) technology to capture CO2 from point-source contributors, such as power plants and other industries. Large-scale CCS is identified as a critical technology to reaching global targets to meaningfully reduce GHGs and meet the 2ºC climate goals set out in the Paris Agreement.

Several global energy research organizations including the International Energy Agency and the UN International Panel on Climate Change (IPCC) recognize that much of the world cannot meet critical emission reduction targets and avoid dangerous climate change without large-scale CCS.  With a renewed urgency for action on climate change and with CCS identified in the majority of IPCC’s pathway scenarios to get to 1.5ºC, an intentional and tactical approach is needed for commercial scale CCS.

Broad use of CCS Needed Now

As seen with successfully deployed projects, such as Boundary Dam 3 CCS Facililty, large-scale CCS can capture 90 per cent, or more, of CO2 emissions and prevents it from entering the air.  CCS offers the world flexibility and time to make the transition to cleaner systems.  It means we can retrofit, rather than replace, vast parts of the global infrastructure, while meeting the increasing demands for products, such as steel and concrete.   Maintaining these industries also ensures jobs for millions of people around the world.

CCS is therefore an essential part of the portfolio of technologies that is needed to achieve deep, global emission reductions.

Climate Change and The Paris Agreement

During the 2015 United Nations Climate Change Conference in Paris, over 180 nations set an aspirational goal of limiting global temperature increase to 2.0°C compared to pre-industrial levels. In order to meet this goal, the IPCC has reported the deployment of large scale “carbon negative” cycles are needed by 2040.  Recently, the IPCC delivered a special report on the impacts of Global Warming of 1.5°C above pre-industrial levels as a response to the threat of climate change, sustainable development and efforts to eradicate poverty.  The report highlights several climate change impacts that could be avoided by limited global warming to 1.5°C compared to 2.0°C.   As such, the report suggests that because of CCS’s broad applications and the ability to store carbon, it needs to be taken seriously.  With the report identifying CCS in the majority of its solution pathways to get to 1.5°C, evidence for CCS is strong.

To read a blog on this topic by Beth (Hardy) Valiaho of with the International CCS Knowledge Centre, visit: https://ccsknowledge.com/blog/ccs-required-in-ipccs-scenarios-to-keep-to-15-degrees-celcius