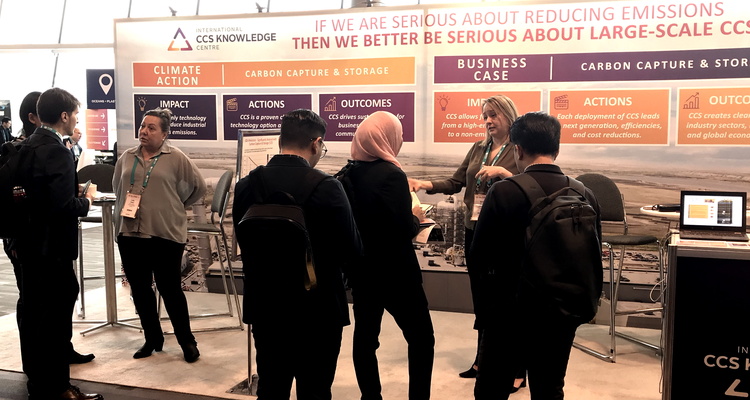 The International CCS Knowledge Centre (Knowledge Centre) took advantage of the opportunity to elevate the profile of carbon capture and storage (CCS) technology by sharing its expertise with world-renowned climate action leaders convened at GLOBE 2020 – North America’s largest leadership summit on sustainability. At this forum key enterprises in the energy and industry sectors gather to demonstrate their initiatives toward meeting global targets for a clean economy transition. This year there was a clear engagement by decision and policy makers of the importance of CCS as a necessary climate mitigation solution and supporting what is needed to see mass deployment of the technology.

Knowledge Centre representatives engaged in numerous exchanges at the innovation showcase; captivating attendees on how CCS is both a viable business model and climate action tool. Beyond the exhibition floor, delegates also gathered in large numbers at two official side event panels on the topic of CCS: ’Getting to Large Scale CCS in Canada,’ hosted by the Knowledge Centre; as well as “A Tale of Time Frames: Opportunities and Challenges in the Carbon Capture Utilization and Storage (CCUS) Ecosystem,” hosted by Capital Power. Key learnings from BD3 and second generation CCS was an important contribution to the dialogue.

GETTING TO LARGE SCALE CCS IN CANADA

Canada has earned a reputation for leading the force in CCS – often sought for its expertise on the world stage. The Knowledge Centre was pleased to provide a platform to showcase some of the world’s most highly-regarded expertise on large-scale CCS by profiling the journey of world-renowned CCS projects within Canada. Hosting the panel, “Getting to Large Scale CCS in Canada,” offered insight into the drivers that influence the business decisions of multinational energy and industry giants.

Collectively, panelists painted a realistic picture of the common experiences encountered when first considering CCS. They underscored the importance of accelerating the deployment of such a clean technology that is proven, and urgently needed, world-wide. Seeing well-defined corporate commitments to achieving net-zero emissions is evidence that the clean economy transition is moving in the right direction. Here is a more in-depth overview from each panelist:

In sharing the learnings from the operation of the Boundary Dam 3 CCS Facility (BD3) – the world’s first operational CCS facility on a post combustion coal-fired plant – Hardy touched on how Saskatchewan has built upon a long history of transborder transport of carbon dioxide (CO2) between Canada and the U.S. for permanent storage in Enhanced Oil Recovery (EOR), and is now seen as one of the epicentres for full-chain CCUS innovation. She underscored the importance of knowledge-sharing and working collectively to see advancement in CCUS, which carries technological certainty and reductions in risk and cost, as detailed in the Knowledge Centre’s Shand CCS Feasibility Study.

The Shand Study shows that compared to BD3, a CCS system at the Shand Power Station could see capital cost reductions of 67 per cent per tonne of CO2 captured as well as 92 per cent in potential savings to power plant integration capital costs; capturing more emissions at lower loads such that more than a 90 per cent capture rate is possible.

Lehigh Cement – a Canadian cement production facility under German multinational manufacturer, HeidelbergCement Group – has its eye on meeting the recommendations from the International Energy Agency Sustainable Development Scenario (SDS) to reduce CO2 emissions while continuing to meet production demands for cement. Recently, Lehigh Cement announced a global-leading initiative of pioneering a joint feasibility study of CCS on an industrial cement facility with the Knowledge Centre, that builds upon learnings from BD3, and as further outlined in the Shand Study.

Kent Stuehmer, vice-president of Operations for Lehigh Cement, talked about how CCS will support Lehigh Cement’s emissions reduction targets as clearly outlined in its HeidelbergCement’s Global Sustainability Commitments 2030. HeidelbergCement is also currently conducting carbon research projects at its CCS/CCUS operations worldwide, in Belgium, Germany, Canada, Morocco, The Netherlands, Norway. These efforts are part of a vision to achieve carbon-neural concrete by 2050 and potentially make concrete the most sustainable building material.

Jeff Pearson, President of the Wolf Midstream Carbon Business Unit, was able to offer an in-depth look at the Alberta Carbon Trunk Line (ACTL) system, which the company built, owns, and operates. The ACTL is the first large-scale CCUS project in the province that will collect CO2 from industrial emitters in Alberta’s Industrial Heartland and transport it to legacy oil reserves throughout Alberta for permanent storage in enhanced oil recovery (EOR). The project currently consists of two independent sources of CO2 coming from the Nutrien Redwater Fertilizer manufacturing plant and the Northwest Redwater Sturgeon Refinery, and is actively seeking to acquire new suppliers of CO2 from both Industrial (fertilizer, hydrogen production, cement) and post combustion (power generation, oil sand steam boilers) sources.

According to the ACTL website, this system will be able to annually gather, compress, transport, and permanently store up to 14.6 million tonnes of CO₂ in EOR at full capacity. This amount of captured CO2 that is prevented from entering into the atmosphere is equivalent to approximately 20 per cent of current oil sands emissions, and equal to taking every car in Alberta off of the road. The ACTL consists of a 240-kilometre pipeline that will make up the main artery of Alberta’s CCS network. Once complete, the ACTL will be known as the world’s largest CCUS project that exclusively addresses GHG emissions originating from human activity. Wolf Midstream is also focused on building a world-scale CO2 infrastructure business leveraging the expertise gained through the construction and operation of the ACTL system.

As a leading global integrated agriculture solutions provider, Nutrien is another great example of an emissions-intensive industry with a global focus on CCS as a promising solution for greener operations. As with all essential industries, a fine balance must be found between balancing global production demands with greenhouse gas (GHG) reduction targets. Trevor Williams, Senior VP of Operations in Nitrogen at Nutrien, articulated the key role fertilizer will play in sustainability goals set out by the United Nations; specifically, in the areas of eliminating poverty, hunger, as well as maintaining biodiversity. He also mentioned that a key consideration for any emissions-reduction policy is by taking into account the impact of GHGs on a global scale.

Nutrien’s Sustainability Strategy outlines opportunities for CCS to play a significant role in reducing emissions in its mining and fertilizer production activities. The ACTL carries CO2 captured from the Nutrien’s Redwater Fertilizer manufacturing facility to EOR projects in central Alberta. Mitigating Alberta’s nitrogen emissions by permanent storage through EOR is one of Nutrien’s transition initiatives that it is looking at expanding for further utilization. Reducing process emissions, as well as fuel and electricity use, are all identified as important mitigation areas in its value chain.

Shell Canada is another Canadian company comprised of infrastructure veterans that are changing the landscape in Alberta and abroad. CCS Business Opportunity Manager, Tim Wiwchar, focused specifically on the costs of developing the Quest CCS facility near Edmonton, which has captured and permanently stored more than four million tonnes of CO2 since it went online in 2015. In talking about Quest from demonstration to commercialization, he noted that total costs for future projects would be significantly reduced due to re-using publicly available engineering and design, existing infrastructure, along with optimizing design, construction, and operations.

In listing several of the successes of Quest, including how the facility was built ahead of schedule and under budget and has a 99 per cent reliability rate, Wiwchar drew a connection to some of the common misconceptions about CCUS to highlight the fact that the technology is viable and efficient. He also emphasized the need for government mechanisms to enable commercial CCS, citing several recommendations, including: an effective government-imposed CO2 pricing mechanism; a level playing field with alternative low-carbon technologies; and short-term demonstration support to drive down costs and make capital investment competitive.

The Knowledge Centre also had a chance to share key CCS lessons on the “A Tale of Time Frames: Opportunities and Challenges in the CCUS Ecosystem,” panel, which looked to expand the dialogue around the findings from the International Energy Agency (IEA) and the Intergovernmental Panel on Climate Change (IPCC) – two of the most credible international bodies on sustainability that have repeatedly acknowledged the necessity of CCUS technology for reaching emissions reduction targets in most of the world.

Hardy sat alongside Chris Severson-Baker of clean energy think tank, Pembina Institute; Eric Redman of energy and climate consulting firm, Thunderbolt Clean Energy; Kate Chisholm of Capital Power; and the moderator of the panel, Phil DeLuna from the National Research Council Canada (NRCC). De Luna led discussions on exploring barriers to CCS deployment and how to overcome them. The Knowledge Centre addressed the role of CCUS in decarbonization in the coming decades; focussing on industrial goals for GHG reduction and how CCS is a powerful tool in the toolbox for heavy industry.

Accelerating CCS – One Conversation at a Time

GLOBE 2020 was highly successful in capturing the latest trends, initiatives, and considerations around large-scale CCS. The Knowledge Centre established several important connections with climate action leaders. It is encouraging to see CCS mapped out as a central component in several of the corporate sustainability/social commitments for achieving net-zero. Corporate and governmental commitments will continue to play a large part in helping to further promote the viability and readiness of large-scale CCS for effectively limiting global warming and transitioning to a new energy economy. The Knowledge Centre was motivated by the uptake on CCS as a key climate action tool at this event and will continue to take advantage of opportunities to continue the dialogue on the need to accelerate deployment of this crucial technology.