CCS is Very Much Active in Sask & Around the Globe 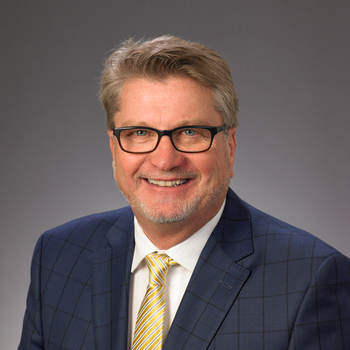 Michael (Mike) Monea grew up in Southern Saskatchewan, Canada with a passion for geology which has fuelled his career path to date. He holds designations as a Professional Engineer, Professional Geoscientist and is a member of the Canadian Institute of Corporate Directors. His entrepreneurial vision is the root of his past successes in developing companies and overseeing the construction of megaprojects.

Mike is the former President and CEO of the International CCS Knowledge Centre a non-profit organization which he helped to establish with BHP Billiton and SaskPower. This new initiative represents a culmination of Mike’s hard work as the president of Carbon capture and storage initiatives at SaskPower where he was in charge of creating and building the world’s first carbon capture plant for a coal electric unit valued at $1.5 billion CDN.

As a world-leading scientist, research and development is a key component in Mike’s mission to help reduce greenhouse gases through CCS technologies. His oversight of a scale-sized Carbon Capture Test Facility has ensured that progress continues to be made with international vendors on post-combustion capture systems. Progress gained in these areas can help reduce costs and advance CCS.

Mike’s past experience in oil and gas has allowed him to understand the benefits of and opportunities for carbon dioxide for enhanced oil recovery (EOR) and deep saline reservoir storage. Mike secured sales of CO2 from the Boundary Dam CCS Facility to oil fields in Southern Saskatchewan. Early on in his professional career he was trained in oil and gas operations in United States and went on to create two oil and gas companies, Nautilus Exploration and Associated Ltd. (in 1982) and Flatland Exploration Ltd. (in 1999). He had the opportunity to develop EOR procedures as the head of the Petroleum Technology Research Centre (PTRC), amongst other processes for the oil and gas industry.

Throughout his career, Mike has understood the importance of partnerships at a local, national and international level. In 2006, Mike formed a Chinese investment company and since then has worked with most power, oil and regulatory agencies in China on CCS knowledge transfer. Mike has travelled the world speaking on CCS and is a sought-after panellist and advisor for this ground-breaking technology.

Mike is now the President of the Monea-CCS Services Ltd.

Carbon capture and storage is a pioneering story in Saskatchewan - yet despite its international success, there has been some confusion about how CCS is valued in the province and the world  -   I'd like to shed some light on it.

The local news  media  had recent  stories of  SaskPower’s pending decision (anticipated in early 2018) to its Board of Directors and the Government of Saskatchewan, specifically related to whether CCS would be recommended on their aging BD4 and BD5 power plants.

It's  about BD4 and BD5 and their capabilities and the cost to upgrade those plants - with CCS added to extend their operating lives. SaskPower has stated this decision is pending.

To be clear, a decision on whether to add CCS on BD4 and BD5 are not an indication of the success of the CCS facility on BD3. – Where in fact, SaskPower CEO, Mike Marsh said in a statement (Nov. 3, 2017), "The project has been heralded around the world as a major breakthrough in the effort to reduce greenhouse gas emissions.”

For reference, the BD3 CCS facility, recently experienced a record-breaking month, in October 2017, as noted on SaskPower’s website.  It was reported to be running at 85% of maximum capacity with 85,375 tonnes of CO2 captured.  If this pace were to continue  for a year, more than 1,000,000 tonnes of CO2 would be captured.  The plant was designed with an overall 85% capacity factor for all outages and de-rates.

The  ingenuity and engineering advancements in the commercial deployment of CCS in this province continue to draw global attention. This means that the eyes are on Saskatchewan to be leaders in innovation that is solution-focused. We offer investors and industry the technological and  policy know-how - that significantly reduces costs and  risks associated with CCS projects.

Which is why the International CCS Knowledge Centre was created - established in 2016 as an initiative of BHP and SaskPower with the goal of accelerating the global development of CCS technology by sharing access to the data, information and lessons learned from SaskPower’s Boundary Dam 3 facility and by incorporating the knowledge and experience from CCS projects elsewhere in the world. Read more.

In early October 2017, we hosted representatives from 14 countries  to discuss lessons learned and what's next to globally advance CCUS. Read more  and news release.

In mid-November, we were featured on the world stage in Bonn Germany at the United Nations Congress of the Parties. Read more.

On December 1st  the province signed an agreement between Saskatchewan and three US states - creating a mechanism to collaborate and share knowledge on CCS.

On December 8th we signed two  Memorandum of Understandings (MOUs) in Beijing, China - the first with  Sinopec Nanjing Chemical Industry Research Institute; and the second one with Huaneng Clean Energy Research Institute. These MOUs along with two previous in the China,  facilitate the initial steps for both countries to work collaboratively across various sectors, such as industry, research institutions and government with the shared vision to develop CCUS in China – in order to reduce global greenhouse gas emissions.

The advancement of CCS is very much active in the province and around the world because of the smart work of Saskatchewan’s facility and their courage and willingness to be first.